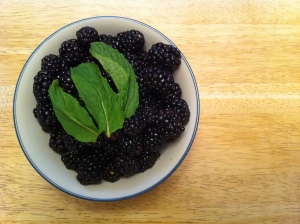 Did Scott like my Blackberry Mint Soda recipe, or did it put our marriage in peril? Let's find out.

Say, do you remember last week when we made three types of vodka sodas? If you don’t, then I bet you’ve been making them every night since! Now, if you would, sober up just long enough to see how my taste test went.

As soon as I wrapped up taping for the vodka soda video, my husband walked in from work. Is there anything more American than having a cocktail ready to go when you’re husband walks in the door? I mean, aside from the overwhelming amount of camera gear, the ingredients in the glass that were not vodka and the fact that we’re both dudes, it was like a scene out of “Mad Men.”

Remember, the Strawberry, Lemon and Basil Soda and Spicy Ginger Soda recipes were from bon appetit, and I made up the Blackberry Mint Soda recipe on the spot. Did Scott like mine as well as the chef’s recipes? Watch and find out.

Also: I told you about how protective he is of that flour sifter!