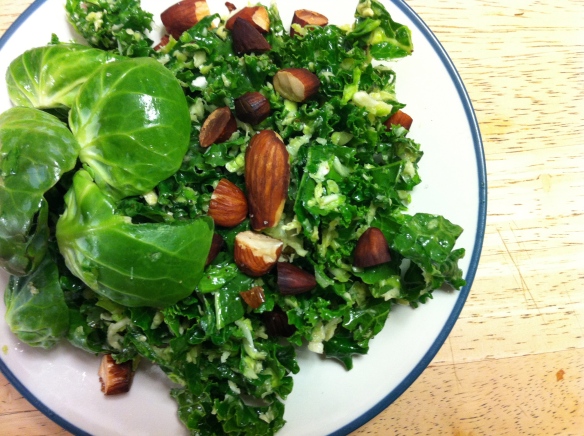 Behold: Kale and Brussels Sprout Salad. So good that you ignore the fact that "brussels sprout" is a weird thing to say. They should have called it "Baby Cabbage on a Stick." Imagine the state fair tie-ins and trickery. Damn, sometimes I wonder why no one checks with me on these things.

We’re kicking off the Thanksgiving Side-Dish Face-Off today, as I am the type of person* who documents hosting his first Thanksgiving and then creates a fake movie trailer about it. First up, Salad No. 1: Kale and Brussels Sprout Salad. Next, Salad No. 2: Shaved Root Vegetable Salad.

If you hated brussels sprouts as a kid, I hope you’ve apologized to your parents for being wrong. Because you were wrong. They are delicious. They are what would happen if cabbage were miniature and grew on stalks. You cannot deny that that is nature at its finest. Think of something you like, and then imagine it miniature and on a stalk. Better, right? Yeah. Better.

Love of brussels sprouts aside, I’d never tried them raw before, and was intrigued when I found this recipe for a Kale and Brussels Sprout Salad in the latest bon appétit. The idea is simple: shred kale, shred brussels sprouts, slice almonds, make dressing. You’re done. You’re happy. Life is great. Until you run out of this salad, and then it’s time to start questioning your decisions again.

I threw the brussels sprouts into the food processor to shred them, then kept a few leaves for garnish. The salad turned out a bit like cole slaw. So, through the magic of adding more food to my food, I turned it into a new dish: Kale Slaw! (I’d like to pretend I came up with this name, so please ignore all of these Google results and start telling people I came up with it.) With some shredded carrots, walnuts and cranberries, it was like the salad I’d never even thought about until two days ago was a salad I hadn’t even thought about until today. According to the people in my office who saw me grab this from the fridge and were thus obligated to say something nice about it, it looked pretty. Hey, now you look at it: 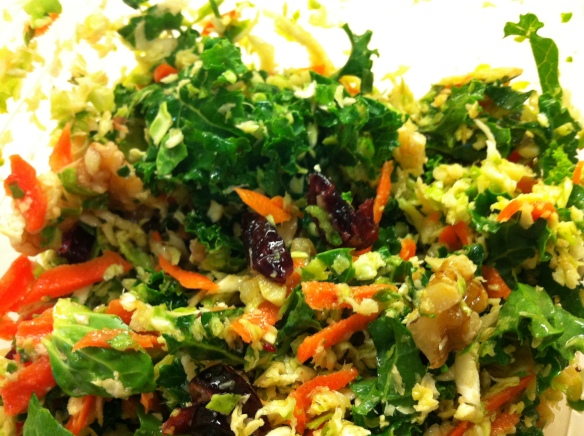 And now tell me it’s pretty.

Thank you! I made it myself.

* The awesome type of person.